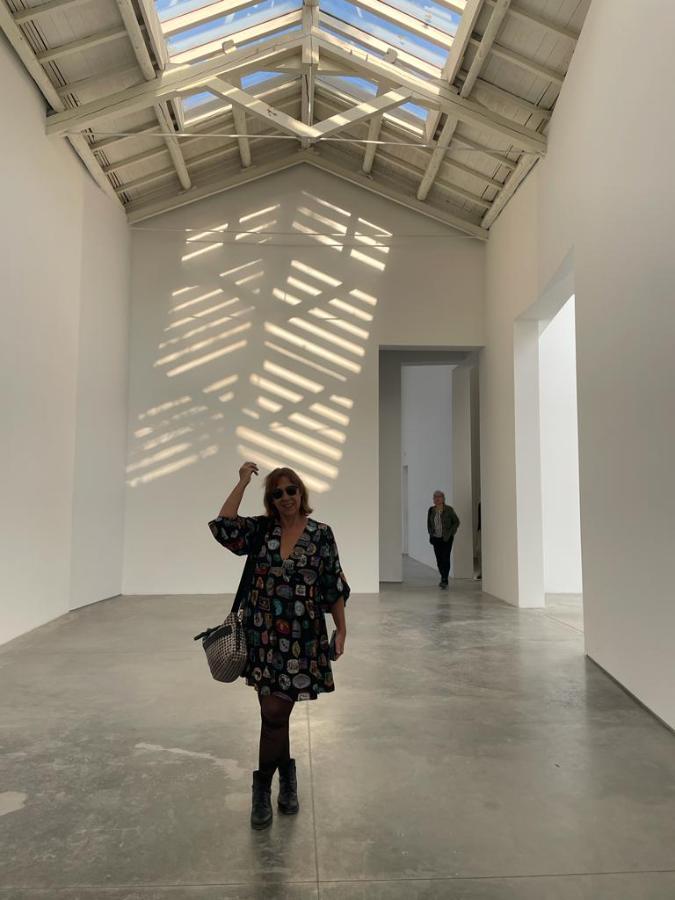 Marie Julou is the painting pseudonym for Tina McCallan. Marie is her middle name and Julou her mother’s maiden name. Mostly painted on amateur canvases, Julou’s work is a tongue in cheek attempt to reconnect with her French ancestry. Think easel painting in Montmartre, Berets and Bohemia, Julou’s work seeks to undermine the occasional pomposity of oil painting by using bright candy colours, occasional glitter and most recently the colour pink.

Born in Guernsey, Channel Islands in 1964, to an Irish father and a Guernsey Mother, Julou studied painting at Portsmouth Polytechnic (B.A 1984-87) and the Royal Academy of Arts in London (M.A. 1990-1993) after which she was awarded a DAAD scholarship to study with Gunter Uecker at the Art Academy Dusseldorf (1994-96). Concerns at the time were the spiritual in abstract art, authenticity and female language in painting.

Keen to experiment, in Düsseldorf, her art practice broadened to include installation, performance and film which resulted in several group and solo shows in Germany and the U.K finally culminating in a practice called “Recreations”, a painting performance where she invited the audience of museums, often hundreds of people, to become the artists and paint their own collaborative masterpiece. See www.tinamccallan.com Parallel to this “extroverted” practice she has always produced abstract paintings in a more “private” introverted practice exhibiting under her pseudonym. Over the past few years, this work has become her main focus.

In her current paintings, as well as revisiting the previous concerns, Julou seeks to re-appropriate the almost forbidden colour pink to make a variety of paintings, some of which have their roots in formalism, others in process painting and others in “Outsider Art”, developing a practice she calls, “Irreverent Abstraction”. Another concern in her work is the idea of “Horror Vacui”, the fear of empty space. Using pencil on oil paint, she draws onto the surface making repetitive marks that resemble doodles, scratching the surface like sgraffito in Italian art. Other works allude to tattoos and scarification while in some, drips are visible, highlighting gravity’s effect on the paint. The material and meditative process of painting is crucial, as well as an awareness of the haptic: how time seems to slow down during the act of making and viewing a painting. Each painting has its own archaeology, a history of colours and marks buried under the final layer. Julou desires to create jewel-like visual poems for the viewer as antidotes to a screen dominated society.

Having lived in Düsseldorf, Paris, Istanbul and Fethiye, she seeks the liberating status of outsider and currently paints out of a studio in Russafa, Valencia, Spain.